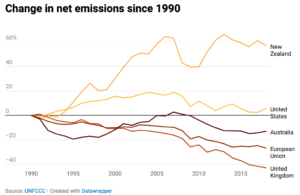 I asked Professor Robert McLachlan this and he answered, “Cutting down more trees than we planted wasn’t so great but the bigger impact of trees in our climate policy has been to delay getting out of fossil fuels. We put all our eggs in the domestic & international carbon trading basket, which fell apart in the 2010s. Now we’re trying more tools. We didn’t have to get out of generating electricity from coal as UK did.”